MY NUMBER ONE VETERAN....MY DAD! 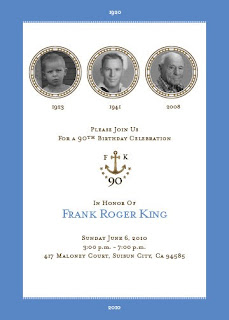 I've been sick the last several days, so this little tribute is a day late, but I can't let this Veteran's Day go by without saying a small something about my dad, Frank King.  This last June, this amazing man turned 90 years of age.  There was about a 26 year age difference between my parents.  We  are a blended family as they each had children from previous marriages and then they had a daughter together--but all girls--five to be exact.  Even our dog was a girl-LuLu.  With one bathroom, you could definitely say it was a challenge for my dad when us girls were growing up! 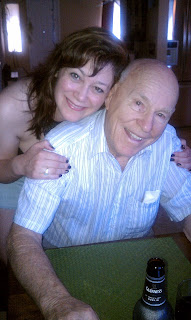 Here is a picture of me and dad during his birthday celebration last June.  We've always been close.  I love him dearly.  I admire how he has lived his life with honesty and integrity.  He has worked hard all his life, never really slowed down when most men his age had retired years ago, and remains active today. 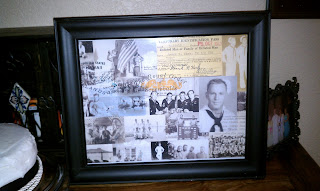 When the Japanese bombed Pearl Harbor, my dad was 18 years old.  He immediately signed up for a tour in the U.S. Navy.  He served on two submarines as a torpedo man--the U.S.S. Tunney and the U.S.S. Sterlet.  While aboard those subs, he patrolled the South Pacific.  To listen to the stories of when the Japanese ships were above them dropping depth charges is fascinating.  Men aboard learned to rely on each other because they had to--it was a matter of life and death.  If I'm not mistaken, dad recently told of a time when they had to patrol the waters off of Japan when the U.S. dropped the bomb on Hiroshima--just in case the Japanese attempted to retaliate. 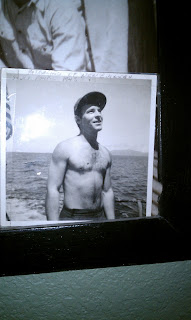 I believe this picture was taken in 1943.  The sub had surfaced during a routine patrol off of New Guinea.  My dad was one hot specimen!  He never lacked for female companionship.  I have always loved to listen to his stories about the different women.  In fact, the older I get, it seems the "racier" his stories become! LOL.  His favorite port was when they would go to Australia.  He recently said that Australian women were the "most welcoming"!  *wink*   But in all seriousness, it is very interesting how couples "hooked" up in 1940's vs. how couples "hook" up in the 21st century.  A man and woman communicated face to face, by snail mail, or by phone.  Now, there's online dating sites, text messaging, and facebook.  Very big difference, there. 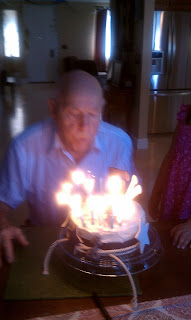 The above picture is dad at his 90th birthday celebration this last June.  As my 42nd birthday approaches, I think about all I've learned from this man.  His influence on my life has been monumental.  Thank you, dad.  For always being there.  For teaching me the importance of love and compassion.  For weekend baseball games that included pretzels and beer.  For broadening my musical horizons to include big band swing music.  For attempting to teach me to jitterbug and having the patience to laugh good naturedly because I have two left feet!