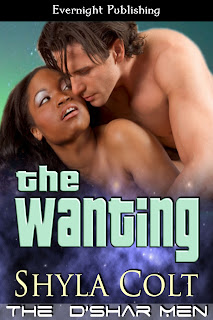 Please welcome fellow Evernight Publishing Author, Shyla Colt!
The excerpt is EXPLICIT in nature and should only be read by those over the age of 18!


The Wanting is my first book in the Men of D’shar series. Forced from their planet Tagget when the sun begins to fail, the Shar people choose earth as their new home.  In this new world where aliens exist, love between species is a wild ride, filled with unexpected surprises and adventure. Follow the Royal D’Shar family as the four brothers find their mate.
The Wanting :  Men of D’Shar Book 1


Phelan D’shar has known agent Zasha Johnson is his mate from the moment she walked into his classroom several years ago. Her age, and his responsibility kept him from staking his claim. But now that the biological mating period has befallen the alien king all bets are off. They come together in a rush of passion that scares Zasha right out of his bed. Zasha has avoided romantic entanglement her entire life after she witnessed the death of her mother at the hands of heralien beau. But the desire between them will not be denied. . Their struggle to meet in the middle is an entertaining trip fraught with passion, romance, humor and unexpected twists.
Sneak Peak :


Excerpt
“I don’t know what kind of alien sleight of hand you worked on me, but it needs to end.”


His demeanor softened by her shaken voice.


“I can’t eat or sleep, and when I do my dreams are filled with you,” Zasha said.


The darkness settled over them and wrapped them in its embrace like a blanket. The false intimacy it created along with their position between the trees concealed them from prying eyes. That knowledge made him bold.


“Tell me what you want me to do,” he said. His large hand slid up to free her hair from its constraint.


The heavy weight wrapped around his fingers. The contact between them served as a balm to the frayed nerves worn with each day that passed. Before they were civilized, his people’s behavior was deplorable. Public mating rituals were performed in front of the pack to prove their claim to all, and a fight to the death over the woman of their choice was considered normal. Much of the behavior had been bred out, and what was left was usually controllable. Her reluctance to admit their bond pushed him to the brink of his limitations. He’d never felt as alien as he did this past week.


“Relief, I need relief.”  Zasha’s voice had gone husky with need. Her slim fingers wound in his hair as her body trembled.


Phelan bent to take her lips with his own. The sweet flavor of peaches danced along his tongue as her nails scrapped his scalp. Her full lips were pillow soft against the gentle nips she administered turned aggressive as they moved from his mouth to his neck and back again. Tiny white teeth marked their territory, and he loved every moment. Zasha’s urgency was a delicious torture that overrode rational thought as he lowered her body down to the soft blanket below. Under the concealment of night they were nothing more than two lovers ensnared by the romance found in the classical chords.


“Then let me warm you,” he whispered into her ear.


His tongue traced the delicate shell of her ear before he indulged in the column of her neck. Zasha’s content sighs and the feel of her nails on his back beneath his shirt spurred him on. His hips ground into hers, the hardness between them unmistakable.


“Phelan,” she moaned. Her long legs spread as wide as she could manage in the pencil skirt fit of her dress.


The corners of his mouth twitched upward at her hushed protest when he rolled off her and propped himself up onto an elbow. His lips dipped to cover hers once more as he eased up her skirt. His hand skimmed beneath the crisp cotton of her dress, and ran along the damp cloth barrier. Her cream had soaked through her panties and rolled down her thighs.


“Phe.” The sound of his name shortened on her lips made his cock twitch. The unconscious familiarization made him growl. A flick of his wrist popped the elastic band off the cloth that barred his entrance. Thick digits drove inside her flooded tunnel. Her slick walls tight around his fingers as she rocked her hips.


The fluttery response from her vagina made him smirk. She liked it when he told her what to do. When he took the control from her and pushed her boundaries. He added another finger and titled his thrust to hit the sweet spot inside her.


“Come all over my fingers, baby.”


He took her cries into his mouth as she convulsed, her pussy a vise grip around him as her cream overflowed. Phelan removed his hands and smoothed her skirt back down before he sucked his fingers into his mouth. The salty sweet flavor a tangy taste he relished as she slowly came back to Earth.


“Is that better, Zash?” he asked, voice strained as he adjusted his painful hard-on.


Zasha voice had gone soft, and he could feel her mental retreat. He hooked an arm around her waist and eased her to set beside him as he tucked her beneath his shoulder. Damned if he’d let her run again so soon.


“Call me what you did before.”


“Because it’s too much too fast! I don’t know you, and I sure as hell don’t trust some alien biology I’ve never heard about before.”


“It’s not exactly a fact we bring up to people in polite conversation.”


“The point is you’ve had your whole life to wrap your mind around this. I’ve had seven days.”


“That should be long enough for you to realize this isn’t going to go away,” he said.


The silence that fell between them all the answer he needed.


“What do you want from me, Zasha? The Wanting will become painful if we continue to ignore it. You don’t want to come together in a blinded lust. It’s too dangerous for you.”


Want to read more?  The Wanting to can be purchased at
www.evernightpublishing.com

Thank you so much for coming to my blog and sharing your story today!

What a terrific excerpt! This is definitely on my TBB list.