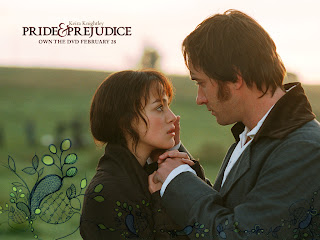 Morning!  Took yesterday off from blogging for my birthday!  Today, I thought I would share two scenes from a couple of my favorite movies.  A strong romantic at heart, I fell in love with the remake of Pride & Prejudice.  There is one scene in the entire movie that makes me lean forward in my seat and hold my breath.  It is so frought with tension as the hero and heroine let their emotions take over.  Mr. Darcy confesses he loves Miss Elizabeth and asks for her hand in marriage but does not realize she just found out he was the one to ruin her sister's chance at love and happiness.  Watch:

Do you see it?  The universal laws of attraction as they are shouting at each other, they move in closer.  His gaze touches on her mouth and his head moves forward...She realizes that he is going to kiss her and her breath catches... Then BAM!  The spell is broken as Mr. Darcy remembers everything they'd just talked about and his "pride" and anger has him drawing back, stating, "Forgive me, Madam.  For taking so much of your time."

Now, let's propel ourselves a couple of hundred years.  My next scene comes from an unexpected movie.  One I thought was going to be completely lame...(sorry Mr. Movie Maker, but lame movies do happen from time to time). 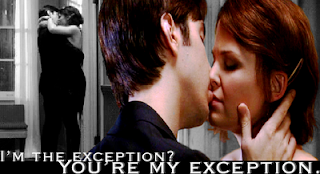 Do you recognize Alex and Gigi from "He's Just Not That Into You?"  Remember how he coaches her throughout the film, telling her the rules of dating?  Basically, all women are the "Rule" not the "Exception".
My interpretation of what Alex is saying is that when women tell each other of these stories where they have a friend or knew of a friend of a friend that had been dating a guy treating them absolutely rotten but lived happily ever after...those women are the "Exceptions".  Meaning, those scenarios are few and far between and women tell each other these stories to give each other hope.  The reality of the situation is that all women are the "Rule" expecting "happily ever after", but will never find "the one".
As the movie progresses, it is Alex who ends up falling in love with Gigi.  When he realizes this, he comes knocking on her door....   Watch:
﻿I love his honesty in this scene, but mostly, I love how Gigi's character has evolved into this woman who isn't making the situation easy for Alex.  If this had been in the first few scenes of the movie, she would've caved to Alex right away.  Instead, she is using her brain, thinking his words over and not giving in to her own emotions.  But when alex says, "You're my exception..." and kisses her...  How FREAKIN' ROMANTIC IS THAT??????  Poor Gigi has been treated poorly by all the guys in the movie, she deserves her own HEA!  And when she gets it, it's a huge payoff for the audience.
I hope I've given you something to think about...
Happy FRIDAY!
Kathleen
Posted by Unknown at 7:11 AM